Brexit Survey Report – Why do we want to leave the EU?

HomeAction LearningBrexit Survey Report – Why do we want to leave the EU? 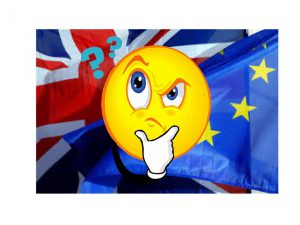 On October 26 we posted a blog with a link to a questionnaire to try to find out why people voted for Brexit?. We promoted the blog on LinkedIn; 50Kimpressions, 19 Clicks and 0 reactions and Facebook; 10K impressions, 745 Clicks and 243 reactions. From all of this we have 64 comments from Brexiteers, 11 comments from ‘remainers’ and 12 people who completed the survey; thank you all.

Whilst twelve responses to a survey with a potential response group of 17 million has no real value we feel, that for those who completed it, the answers might be interesting. We provided five possible reasons for Brexiting with subsidiary questions and the opportunity for responders to state their own reasons if these were different. For those who completed the survey the most important reason for voting Brexit were:

See Annex A for details.

The issues identified on Facebook, see Annex B, express in a more open style the degree of emotion behind the Brexit vote.

hat have we learnt?

Our goal was to try to find out why voters want to leave the EU in order to understand whether the Government’s focus on leaving to find new more profitable markets elsewhere, is the answer to the ‘right’ problem?

It appears, from the responses we received that most respondents want to Brexit for the sake of ‘Brexiting’. The Brexiteers it seems believe that the problems facing the UK are created by our membership of the EU. Therefore leaving will solve the Nation’s problems and the Government seems to agree.

Is this the ‘right’ problem? Certainly the way the people voted and many of our politicians feel about the EU; our membership is the problem. Once we have left everything will be OK!. Will it? Other member states make a ‘good living’ trading in the single market and outside of course, why can’t we? Is the problem our membership of the EU or is it us? If our economy was buoyant and there was money enough for all, would people be unhappy with Europe?  Will Brexit empower us to fix our economy or just make us free? We will see…

Thank you again for your help

The EU is anyway either going to break up or turn into a neo-Soviet Union (which will in the end break up, probably violently). The chances of a peaceful break-up are greater if the United Kingdom leaves soon and shows the other states who are fearful of leaving the way.

The Government – my main reason for voting Brexit

The Economy – my main reason for voting Brexit

A different reason for voting Brexit

My mother in law voted Brexit to reduce number of Muslims coming to the country.

Ultimately I see it as a **

Many, many reasons ranging from the duplicity of the EU commission, the unevenness of the EU, the EU is in serious trouble financially. The protectionist policy of CAP, the destruction of our fishing industry, the jobs lost because of EU policies; too many reasons to mention. British net contributors supporting countries that should never have been allowed to join under the EU’s fiscal policies and only saw it as a passport to wealthier EU countries. I could go on and on.

I know exactly why I voted to leave and I don’t need a pontificating pseudo intellectual telling me and 17.4 million others that we didn’t know what we were voting for. I am a fairly mild mannered man, I don’t resort to swearing or degenerating to the point of gratuitously insulting people but if the self-styled “political elite” don’t start grasping that far from being elite they put themselves up for election to represent the people, not themselves, they work for the electorate and in everybody’s interests they had better start reflecting the democratic result otherwise there is a real risk of major rifts developing in society and real extremists coming to the fore. Their stupidity and arrogance is already creating a lot of unnecessary unrest. Once the die was cast people should have got behind the decision and not created the impression that the EU has of division and weakness. Despite our many flaws one of the things among many that made this country and its citizens great was our determination, our will to win tempered by our tolerance and willingness to support the underdog and those that need our help. The world is our oyster the blighted EU potentially our graveyard.

PS After today’s ruling in the (High) court get ready for civil war if parliament can’t respect the peoples decision. Then it’s the people’s right to remove the parliament

The Labour nutters who since being led by the War Criminal opened the borders to uncontrolled immigration and this same will continue under your present Trotskyite leader, this has been compounded by weak idiotic leaders like Major and Cameron who let millions of EU migrants come here and have access to our Welfare State and its Benefits. We are not the ones who are destroying our Welfare State, we build it and keep it going with our money and talk the time those self-serving, bollockless shits in Parliament are letting all these new migrants using and abusing to our cost.

Thank goodness we are leaving the sinking ship, that is the EU… don’t let it pull us down;  get out ASAP !!

The organisation, called the EU, is imploding before our eyes. It has caused chaos in Greece, Spain, and Portugal. It is corrupt, and unaccountable. The sooner (we get) out the better.

Let’s put it this way without British money  in the pot Europe is finally going to have to change or go under and I think under unfortunately. We can never be as one; too many egos and cultures,

This is what happens with open borders.. and it will get worse. Paris is under siege… http://www.express.co.uk/news/world/727862/Migrant-crisis-club-wielding-refugees-running-battles-Stalingrad-Metro-Paris

Tired on being a European

Yeah, yeah – people that disagree are whiners with no balls – good grief, no intelligent arguments or discussion – just straight into the usual insults. By demeaning strangers personally you don’t make your case, you are just shown to be a divisive smirker who thinks that a small majority gained by lying gets them all their own way in a democracy and that there’s now no need to even consider the 63% of the country that didnt vote for this mess. We honestly disagree with what’s going on in this country we love but you want to deny us even the freedom to voice opinions to social media friends. You may be full of triumph now but it will be a hollow victory – arrogant victories won by lies always are.

You keep saying you know why you voted out, SO tell us. WE won’t laugh at you, we remoaners are too angry to laugh. You shit for brains have got us out of the biggest market in the world, and left us in the clutches of the most corrupt government this country has ever had. DID you do it to stop immigration, well you won’t get that, or did you do it for democracy. AGAIN you won’t get that with the Tory’s, Or to save the NHS by giving it a blood transfusion of 350 million a week, well you know now you’re not going to get that either, SO what about world trade you leavers talked about? WELL that can take anything up to 10 years to set up, what do we do in the meantime? Get taken over by crooked Americans or become part of a CHINESE conglomerate, And finally will you tell me WHAT BRITAIN has to trade since the Tory’s have sold everything worth selling already?

Not a case of being afraid, I know exactly why I voted the way I did and would vote the same way again without hesitation. There are clearly movements that would like to gain a chance to overturn the outcome of the vote by any devious means. This looks like an attempt at gathering information to be used to discredit the case for leaving the EU. Why are they not interested in why people voted to remain? This poll is not the government asking is it?

Logical people like logical answers; being on the winning side of a vote isn’t an answer or a solution. It’s like saying a guilty verdict is proof of guilt without any reasoning as to the conclusion

How can the government advise of their plans before the EU start talking? Junker hopes the longer he delays the start, more remainers will attempt to stop Brexit

So far there hasn’t been a glimmer of real hope for Brexit. It’s all predicated on Brexit mythology this will magically solve itself. OK, how? Be the world’s first Brexit supporter to provide a plausible answer.

STOP ASKING THE FUCKING QUESTION …. IM FULLY HAPPY AND WILL NOT CHANGE MY MIND … EVEN FOR ALL THE MONEY FROM THE EU …. JUST FUCK OFF ALREADY

I know when no means no and the quicker you get it through your thick head the better. You lot get over it and stop crying like a spoilt kid that’s lost it’s dummy

Who the hell is ala international ? The vote has been cast and Brexit won. Why is it that stupid organisations like this pop up all over the place raking through the coals of a dead issue. Piss off back to whatever propagandist pays you to put this pish on Facebook.

Democracy is an ongoing and evolving thing otherwise its fascism